2012: The year I got the "FIT - Complete not Compete" mindset. Thank you FITFIL and Coach Jim Saret!

Being a long time player in the ICT sector, most folks remember me as a "chubby" girl. My battle with weight loss always had me at the losing end of the game.

4-weeks challenge
Last summer (April 2012), I met Coach Jim Saret for the Immuvit MetaFit Challenge. It was a campaign I got tapped along with others blogger friends to try out his famous 4-minute workout daily for 4 weeks. The idea behind the program is to overcome the somatopause phase (middle age bulge). Get our bodies' metabolism "activated" and build stamina.

The program made me face my "patella femoral syndrome" injury as I need to shape-up to loosen the body weight my knees carry. Tried gyms who have its own physical therapist but was not happy with it.

Also got a lot of television interview exposure this year and can't help but noticed my face (sagging skin) as pointed out by concerned friends.

They say it takes 3 weeks to kick-in a habit. By the 3rd week of the challenge, I was already anxious and wanting to do more with my workouts. I began investing in fitness related items like medicine ball and theraband.

The challenge helped me lose around 10 pounds. This was also the time I signed up for the FITFIL Fitness Boot Camp in BGC. 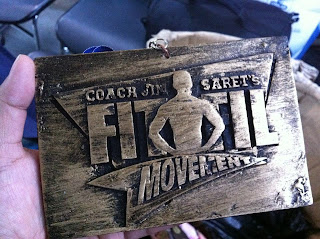 The biggest challenge when doing the 1 month FITFIL program was losing weight.

I found myself becoming one shirt size smaller - but not losing weight. In fact I also gained as I was not really able to work on my eating habits.

But one thing certain was - I became stronger and competitive. The 5 week program had two requirements for graduation. The first one was to do a 5K run on the end of 4th week. The second one was to complete a 500-workout on the last day. I recall ending our first week with the 100 workout. Then this increased to another 100 every week thereon.

I was able to accomplish both challenges and had my first 5k run last July 22. Joined a trail run also last August 26 where I did my 2nd 5k run.

FIT mindset - "complete rather than compete"

When FITFIL finished, like many, I panicked on what will I do afterwards. Got into dragonboat paddling, running, and swimming with completion goals to pursue my path to fitness.

The "complete rather than compete" mindset became my mantra in whatever sport I got into. For swimming, I want to build my ability to swim 1.9 km in open sea this year.

Once done, I will get into biking.

For dragonboat paddling, my objective is to complete a race being in full-sync and speed with my boat mates.

The above after-FITFIL activities allowed me to shape up further. If not for FITFIL, I don't think I would even have the drive to get things done, with discipline, and prioritization.

Compared to the video interview above, taken last February 2012, I can say that my most recent one (October 3, 2012) already reflects a lot of changes as a result of the lifestyle changes made.

Becoming part of the FITFIL Movement
The FITFIL Movement of Coach Jim Saret aspires to have 1 million FIT Filipinos. It is a very powerful idea backed by a program advocacy of training people and trainers too (soon). Those who have benefited from it are doing the word-of-mouth marketing for the said program - encouraging others to join.

As a digital marketer, this kind of response made me re-think on how I approach projects. It made me believe, more than ever, that all campaigns should lead to the creation of a community where people can continue to interact and share their journeys. 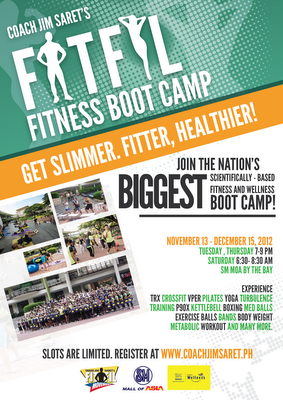 Get the FITFIL Mania in you!
Am very glad that FITFIL will have a 3rd run before the year ends at SM Mall of Asia. Look forward joining it and reconnect with my BGC classmates (and meet new ones too).

From personal experience, getting into FITFIL helps shake-off the sedentary lifestyle that a growing number of us have. Gives you time to take a step back and let go of emotions hounding you during workout sessions. The open-air environment makes you blend with everything that surrounds you and be proud of the fitness choice made.

Personally, working out under the rain are just some of the unforgettable moments I had and very proud of it.

It can help your body become healthier and give your mind or heart the break it needs from anything toxic (which are usually self-inflicted).

Hope to see you at FITFIL Fitness Boot Camp at SM Mall of Asia this November 13 to December 15, 2012!
Email Post
P.S. As an Amazon Associate I earn from qualifying purchases.