The Philippines Broadband Infrastructure: Calling Out for a Hero

Last year, I had an interesting conversation with two concerned friends who asked, "What will it take for Filipinos to act and insist for a better Internet infrastructure?" My answer then, "Unlikely. For as long as we can go online either from work, home, Internet cafe, using USB or wifi connection, we will just shrug whatever shortcomings there are."

However, as my use of the Internet scaled up doing more bandwidth-heavy activities, that is when I realized that it is not enough that I will only care about my Internet bandwidth but be more concerned to those accessing it.

In doing webinars, despite having all participants from the Philippines, we connect to a foreign site to deliver the presentation and interact. I could encourage business folks to license the setup of a webinar solution locally but it won't make sense if everyone's Internet route passes abroad first.

My DigitalFilipino Talks videos, where viewers are mostly local, I would opt setting it up in a local site and server rather than foreign based site especially if it will allow non-passing of Internet traffic abroad.

Although while a lot of people can argue that it won't make sense to do it because of how we use the Internet today, a perspective I believe in before, but I realize now that it also hampers the exploration of opportunities to roll-out web applications exclusively for the local market.

Moving forward, we need heroes in the government, legislative, and telecommunication sector to set and make things right for the current and future of Internet bandwidth in the country.

I hope we could get our act together now before it becomes too late. 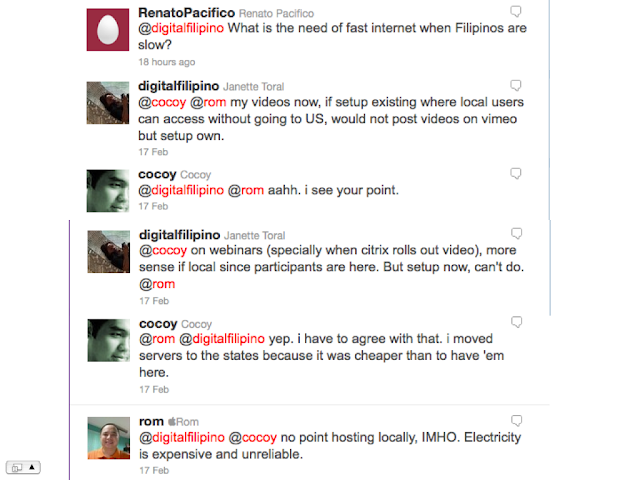 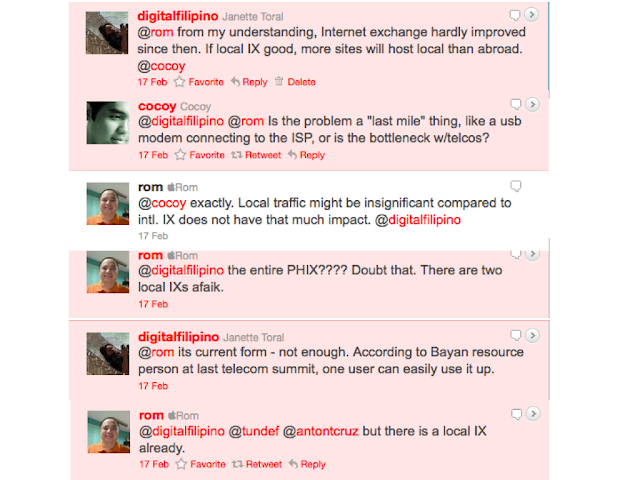 Improving the Philippines Broadband Infrastructure (Why the Internet is slow today?)
(The Need for a True National Internet Exchange)

Dealing with Pride and Humility: 10 Commandments of Common Sense