I just took the Fascination Score test to find out what triggers am I using to persuade and captivate my audience. Results show that my primary trigger is VICE, secondary is POWER, while my dormant trigger is TRUST.

I encourage you to take the Fascination Score test and share your result. :)

December 25 or Christmas is a special day as it was the date when I launched the DigitalFilipino Club 7 years ago. Had big dreams and aspirations. Being impulsive, passionate, and experimental also made me volatile and used the club as a medium to test new project ideas.

As the club reached its 7th year, I began contemplating where do I want to take the club especially after finding out weaknesses of models am aiming for.

Got a copy of Sally Hogshead book, Fascinate, a few months ago and spent last Christmas eve reading it. I kinda got surprised with the premise - when we purchase a product or service, along with it, we also bought its trigger. 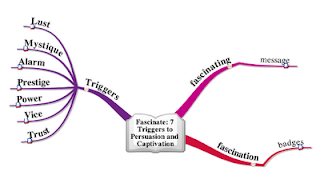 Sally encourage readers to evaluate how the 7 triggers are being used and what can be combined to create a striking message in positioning a product or service.

Here are the 7 triggers:

Lust makes the target audience say, "I want that" or maybe "I want more..."

Not revealing information or challenging people to solve a puzzle is key in applying mystique as a trigger. It reminds me of the Yahoo! Purple Hunt campaign, fraternities, hypnotism, biographies, and the likes.

Mystique makes the target audience say, "I want to know" or "I need to know".

Those in the workforce often experience alarm as a trigger such as not meeting deadlines or coming to work late can result in penalties from a reprimand to termination. In marketing pitches, we see this work in group buying sites like Buyanihan were not meeting the tipping point required can blow the deal off. It also reminds me of Globe's #BangonPinoy Twitter hashtag project last year where for every tweet that used the hashtag, P30 gets donated to victims of typhoon Ondoy.

The Alarm makes the target audience say, "I have to do this now".

I think certification programs, awards, and scholarships click because of the prestige trigger. It gives the recipient and giver a symbol of rank and respect. This in addition to the status, admiration, and opportunities that one gains from the recognition given.

Prestige makes the target audience say, "I earned this".

Apple's introduction of the latest iPad, iPhone, and iPod Touch have demonstrated their domination in the tablet space where users and product developers are willing to work within the constraints of the product. Have seen the power trigger in action as well in the search engine optimization field where Google PageRank tells much on the kind of credibility your site has. Those who abuse webmaster guidelines are also penalized resulting in lower rankings and even removal in search engine results.

Power makes the target audience say, "I will follow your rules".

It is all about rebellion against the rules. Facebook is the best example I can think of here. Where most social networking sites focused on giving users the power to customize, Facebook changes the space by making users follow standards, developers to build engaging applications that access user profiles, and advertisers to think beyond ads when promoting their site online. It is giving major dotcom giants that were ahead of Facebook a run for their money today.

Vice makes the target audience say, "I will take the risk".

All about certainty and reliability that can be depended on. This reminds me of insurance companies like SunLife and AIG that used their stability as a commitment to future service fulfillment. Also of TED.com that promises exciting ideas during conferences. (This also prompted me sign-up in their associates program with book club membership)

Trust makes the target audience say, "I will count on you."

The Fascination Plan of Attack

(inspired from page 194 of the book Fascinate)

The 7 triggers can be used to spice up your messages, writings, and tactical approach when engaging your target audience do the desired action.

It will be helpful to evaluate and assess how you carry out programs and campaigns today based on the "messages mind map" above.

(inspired from page 207 of the book Fascinate)

You can also create Fascination badges that reflect what you represent. This can be tweaked further by adding any of the 7 triggers.

Although reading the above may sound easy at first, going through part 3 that defines the process for creating a "Fascination Plan of Attack" shows that it really requires a lot of creative thinking and understanding of your product. However, I do find it worth the while and currently doing the exercise for several projects to put it to the test. (I will blog about that shortly after this)

The book Fascinate is a great buy especially for entrepreneurs, product managers, and marketers. I bought my copy at Fully Booked for P1099.
Email Post
Labels: fascinate fascination sally hogshead