Building a Tribe: can you lead us?

My talks in the last 3 months have included slides about building tribes or loyal communities. It scares me whenever I see an industry (like the IT industry) whose players are the same people, transferring from one organization to another, year after year. Hardly do you find new leaders being developed and later on, the organization naturally dies or lose its stature for poor leadership.

Anyone can start a tribe or community. The most successful ones meet the needs of a few people who believe in such cause. Examples of this are:

Tribes can be both formal or informal in structure. I believe business or advocacy initiatives today must see their target customers or the audience as potential tribe members being reached out to. 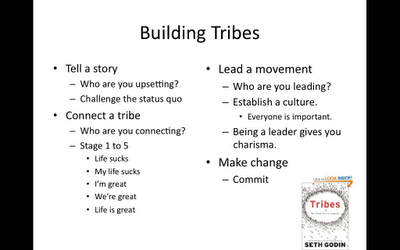 Tell a story
Anyone starting a tribe, according to Seth Godin in his book "Tribes" (many thanks to Jam Mayer-Flores for lending me her copy), must be able to:


Connect
From there, one seeks out and connect to prospective individuals who will see the value of joining your tribe. What you need to look for are people who will actively participate and contribute rather than just wait for things to happen and expect to just reap the benefits.

David Logan in his book "Tribal Leadership" talked about the various stages of tribes. They are:

The kind of tribe members you will attract depends on the culture you instill in the group. Tribe leaders should strive to give every member equal importance as you lead them in actively participating. Leaders who are able to do this well builds up charisma where people follow you because they believe in you rather than forced to or left with no choice or worst because they fear you.

Make change
Once you have started a tribe and build a following, give full commitment in order to get the same dedication from your followers.


Example 1: DigitalFilipino Club
When the club started last December 25, 2003, the story was clear. It is a community meant for people who would like to learn more about e-commerce and receive updates, new developments on a regular basis. It shall be a venue to meet fellow practitioners and learn from each other. A fee was set as a pre-qualifier to ensure that those who are serious and willing to pay a membership fee get to be part of the community. To date, most of its members are e-commerce entrepreneurs, consultants, practitioners, and consumers.

To further demonstrate commitment to the writing project, recognized emerging influential blogs through the years were introduced and talked about in various conferences where I get to speak about blogging. The success of the writing project, I measure, based on how the blogs and their bloggers have evolved.

Some have used their blogs as platform to influence and introduce advocacies, business, new blogs, among others. Others decided to quit and start something anew. I hope you are not the kind of person who looks down on people who "quit" or "fail" as those who succeeded have become experts as they learn from such experience.

As time goes by, new needs are realized and current tribes will not necessarily be able to fill the gap. That is why those who spot it are encouraged to take the challenge of taking the lead. For as the long as the skills and the will to make it happen are there, one can take the initiative of forming one.

Godin reminds aspiring tribe leaders to get over their fear of being questioned about their "authority" as that gets earned naturally in the process. Remarkable products, services, projects, and advocacies usually get their share of criticism. Don't fear being criticized especially if it is given to you with practical constructive inputs on how to improve.


Can you lead us?

I often meet people who expressed a variety of concerns and challenges affecting their profession, personal advocacy, or the community they are part of. Normally, I ask how they think it should be resolved and would follow that up with encouragement of building a tribe and take the lead.
Very few though will pick up on that challenge for one reason or another.

But we need leaders now, more than ever, that can take us to the next level for a particular issue or concern. According to Godin, don't let those who say it is not needed, to stop you, for they are usually the ones wanting to protect the current status quo.