Real History in Periphery: What do I not know?

The four (4) museums and one (1) art gallery Zero In Periphery exhibit was a surprising eye opener. For the first time, I felt the power of art, especially presented in the right context, can influence its viewer.

The exhibit had given me a strong dose of mixed emotions from anger, sadness, and even hate as I felt cheated from everything l learned about Philippine history since childhood.

It brought me fear (and even tears) realizing how much I don't know and have ignored or belittled. If there is one thing for certain, I can't allow a single story to summarize events that has happened to our country to be taken as bitter truth. As we dig deeper and see various facts, it will also force us to ask questions. Hopefully not allow our children to be deprived of the truth like how we were in the early years.

I also hope that our elected officials in 2010 will take the leadership of making sure our history is written in a manner that presents real events that happened and not just a gloss over - underestimating the various sacrifices made by our countrymen during the time of war. Moreso to the innocent victims at the periphery. 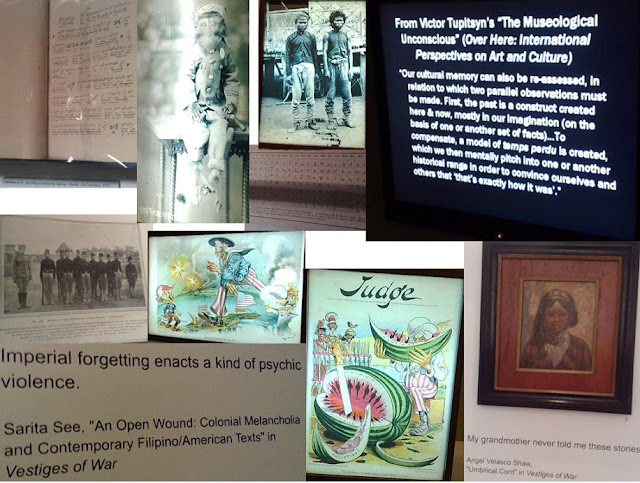 Visiting the exhibit Deleted Scenes at the Lopez Memorial Museum last November 17 brought me realization of an important truth. That there were more Filipinos killed, at least one million, during the time of the Americans in the Philippines, between 1899 to 1913, in comparison to Spaniards time.

The main highlight of the exhibit for me was Sari Lluch Dalena's film, "Memories of a Forgotten War: A documentary on the Philippine-American War of 1899". It was done in collaboration with Camilla Benolirao Griggers. The film sets out to do something about what they perceived as historical amnesia.

One of the most shocking parts of the film was the American reprisals in Samar where the unofficial policy "take no prisoners" was observed. Filipinos capable of bearing arms, age 10 years old above, were shot dead. Although this can be read and listened to when you visit diorama #50 of the Ayala Museum, seeing it in cinematic form, such as the one made by Dalena and Griggers, would only make you realize how horrifying it was.


I encourage you to visit the exhibit that runs up to January 9, 2010 and hope you will appreciate the exposure to our country's past.

I'm glad to have found the video online although incomplete. At the end of the playlist, added "The Apl Song Saga" of the Black Eyed Peas that partly gave a modern tribute to Filipino war veterans based in the USA.

This exhibit made me realize how much of our history was skewed.

All these years, I grew up knowing only one story. That was the Americans liberated and saved the Philippines. That's it. Perhaps more was said but that was the only thing that sticked to my mind as it was often said many times outside of school and all the various exposures we had from American system of education, television programs, food, entertainment, legislation, among others.

Nigerian writer Chimamanda Adiche mentioned in her talk, "The Danger of a Single Story" is being shown or told of only one thing, who tells them, when they are told, how they are told, the number of stories told, that makes it the definite story of a person, culture, or society. It is like power being played on us by persons with authority dictating what we should only know.

There were so many things forgotten, omitted, and even neglected in our history. As to why, only those who wrote earlier textbooks would know. Moreso on the information that gets taught to our children. Perhaps there were more but I guess during such age, historical information does not matter or perceived to be relevant. 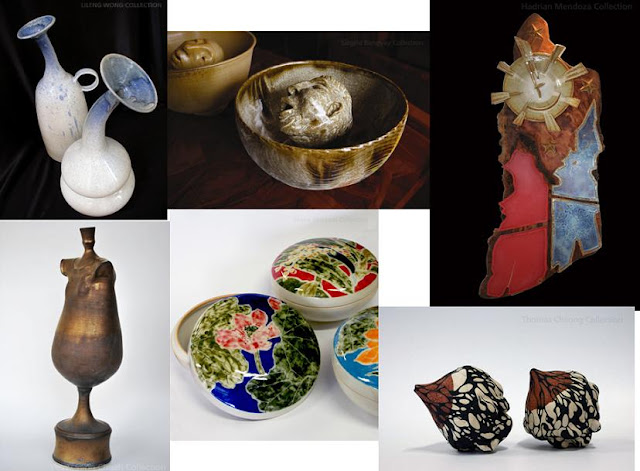 (Visit my Zero In Periphery album for more details about this photo)
This may include history of our elders, prior to the war, engaged in crafts such as ceramic making as shared in the recent Ring of Fire exhibit at the Ayala Museum that ended last October 4, 2009. In looking at the various ceramics on permanent display at the museum, I realized that ceramics speak a lot about the people that live in earlier times.

I recall referring to Filipinos then at war time as victims or prisoners of war. In the process, I may have deleted them - for not seeing them as indviduals. The same can be said for the war and conflict happening in some of parts of Mindanao. In our minds, we have a single story as depicted by media, that there's only chaos in those places such as Maguindanao.

The same can also be said about the Catholic church and all the things that they don't want this generation (and the future ones) to know about the past. 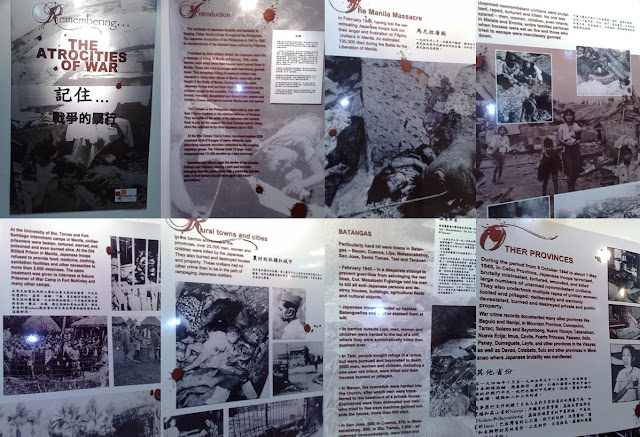 (Visit my Zero In Periphery album for more details about this photo)
We are no stranger to the Japanese war that happened during World War II. A few years back, there were even features on television about our women at war time becoming sex slaves. They were raped up to 40 times a day by Japanese soldiers.

Bahay Tsinoy's Remembering exhibit (ended last November 28, 2009) focused on the 1945 massacres in many places in the Philippines by retreating Japanese troops. It was estimated that around 150,000 Filipinos and Chinese died during the 6 months retreat.
How Filipinos were treated then that includes children being bayoneted and lined up like pigs, women raped, heads cut off, was totally beyond my idea of war (which was all about imprisonment and shot dead).

The Japanese spy network at that time was assumed to be based in Davao. When the Japanese army arrived in the Philippines in 1942, they already had a hit list of people that needed to captured or killed right away. 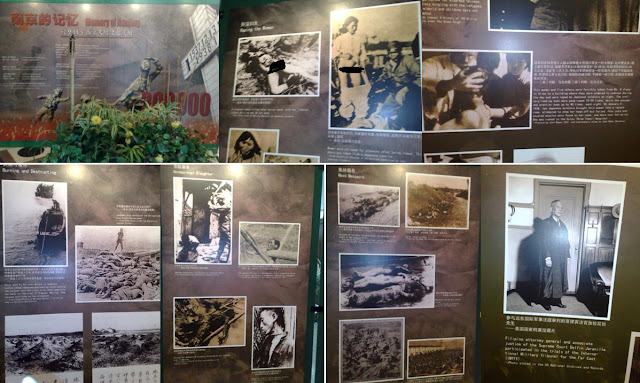 (Visit my Zero In Periphery album for more details about this photo)
In Nanjing, China back in 1937, the Chinese also suffered a similar fate with the Japanese as around 300,00 people died or killed that year.

In our brief chat with Meah See, she mentioned that there is actually a Nanjing war memorial in China to ensure that what happened will not be forgotten.

She also mentioned that the Japanese has not really recognized what they have done during World War II, or their government apologizing for it. Japanese history books only has a gloss over of what happened at that time. 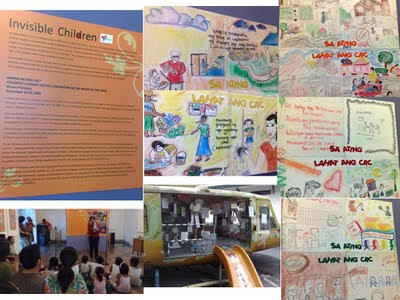 (Visit my Zero In Periphery album for more details about this photo)
It was heartbreaking to see pictures of children raped, abused, killed, dead bodies displayed like animals during the time of war.

It gave greater meaning and pre-text on what the Convention on the Rights of the Child is all about as the main subject focus of Museo Pambata Invisible Children exhibit. It involved the works of children living in difficult situations and how are they surviving despite the various trials in life. The exhibit is on-going till December 20, 2009. 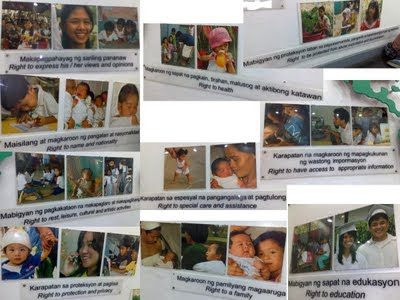 (Visit my Zero In Periphery album for more details about this photo)
The art work, poems, letters, photographs, among others features thoughts and wishes of children from the government, community leaders, professionals, teachers, parents, and fellow children. This includes: 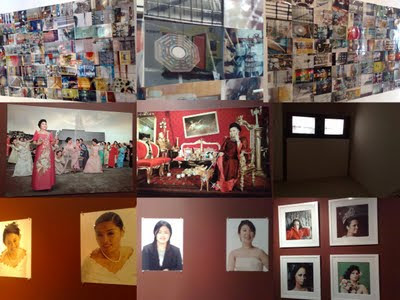 (Visit my Zero In Periphery album for more details about this photo)
What happened to our past heavily influenced how the present gets handled. Looking at the photographs on display at the Beyond Media exhibit of Ateneo Art Gallery (ongoing until December 15, 2009), made me think that in everything that we see, there is more than meets the eye.
(A Voice Remembers Nothing by Lani Maestro. Video shows the sea while names of people missing during the Marcos regime were mentioned one by one.)

It is like life is a series of double exposure. One that we see on the surface and the other details in background either hidden or ignored. It is like the Philippines being projected as a country of beautiful women and glamor, that celebrates the art, while over-empowering those that we don't want to be noticed.
Moving forward
Reviving the Philippine Schools Cyberfair year gave me this feeling of a much clearer purpose. I don't want the youth today to experience what I'm feeling right now of being cheated by what I know of our country's history. That we should not be contented with what we get told and dig deeper on things that we aren't being told.
To the readers of my blog, I encourage you to get to know more about our history and hopefully give ourselves a much better understanding on all the conflicts happening in our country today.
Email Post
Labels: ateneo art gallery ayala museum bahay tsinoy lopez museum museo pambata zero in
P.S. As an Amazon Associate I earn from qualifying purchases.