For the past 3 days, I've been posting on Plurk and Twitter my worries on an ongoing Xoom money remittance transaction. I was trying its unique service that allows Paypal as fund source and the amount gets directly deposited to a recipient's bank account.

My frustration has escalated to the point that I began ranting and searched on past messages about Xoom problems. The latter is what one usually does first before going ahead with any provider. Although often skipped if entity is perceived as "reputable".

The lack of notification and replies to concerns inspired me to make such a topic of my column today - reliability of money remittance services.

Within a few minutes after the article went live after midnight, I immediately got an e-mail from a high-level person there apologizing for the inconvenience. My Paypal "void" request got processed and was offered a coupon to consider trying the service again (which I just did a few hours earlier and now monitoring).

Obviously, the entity must be using some form of an alert system to be able to pick that up right away. I think it would not have reached that point if they were only monitoring sites like Plurk and Twitter as problems can be spotted at its early stage right away in these sites. 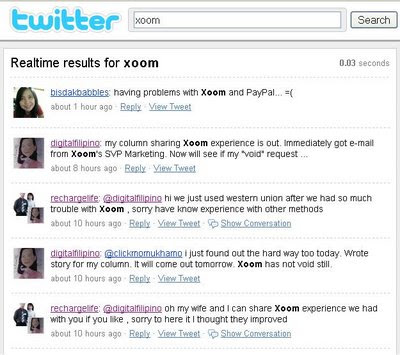 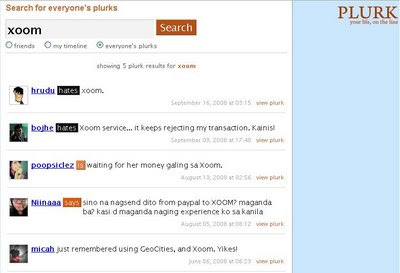 I hope this is enough to prove why monitoring is important especially if the service rendered is availed of users who have account on these sites (a big chunk are also bloggers).

On the other hand, competitors can try offering their services to those who expressed problems and ask them to try it out.

In the end, these resources are out there. It is up to marketers and customer service people on how they will use it to better serve their customers.
Email Post
Labels: money transfer online money transfer xoom
P.S. As an Amazon Associate I earn from qualifying purchases.