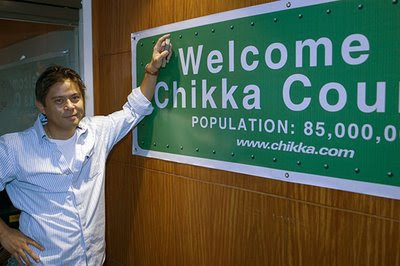 (photo credits: Mario Babiera/MBC Images)
Dennis Mendiola started Chikka with minimal capital in the beginning and during the time of dotcom bust. Customer service, innovation, and good technology were the company’s competitive advantage. Its flagship Chikka Text Messenger represents one of the most sustainable revenue-generating mobile services in the country today.

Its latest incarnation is the all-new Chikka web 2.0 site. Founding CEO Dennis Mendiola explains, “The web-based Chikka Messenger is compatible with all major instant messaging networks and imbued with the superior mobile enabling capabilities we have built our business early on. Over 40 million have registered to use Chikka Messenger since we launched in 2001. Today, with millions of log-ins to all versions of Chikka translating to millions of advertising impressions (monthly), Chikka is one of the most attractive on-line media properties in the region today.”

“Of great value as well is a formidable arsenal of intellectual property and patents filed around our messaging solutions. We are doing well and continue to push product breakthroughs to grow our community and our business.”

Dennis Mendiola stepped down as CEO recently, passing the leadership to co-founder Chito Bustamante, and took on the new role of Chief Imagination Officer (CIO). Personally, I find the position intriguing. In my talks and write-up about e-commerce, I often say that what will limit you is your imagination. Seeing a person carry such a title sets a lot of expectation.

Focused on realizing shareholder value for Chikka’s numerous investors, Dennis is currently exploring strategic options for a merger with companies that complement its strengths.

“The Internet is now on an uptrend again because the "big boys" and the more innovative upstarts have finally realized that there is no sense in keeping their communities isolated within their digital "walled gardens". Even mighty Apple, once a staunch advocate of walled gardens, now allows third party application developers to write software for their new iPhone 3G and sell through their newly launched "App Store". Now everybody is thinking of building apps for the App Store, on Facebook, on Friendster, etc.”

“Partnership is key. Sharing the "wealth" is a great motivator for innovation. I am now focusing my energies on platforms, not on one-off applications, that would allow service providers and developers to launch their creations on the net and on mobile without the hassle of setting up things from scratch. We should all be building the highway and malls that would give them quick market access and hence, the shortest path to profitability.”

Serving Red Cross
Another role that he took on recently is that of a Red Cross Governor. Dennis has projects which he believe is worth sharing with the development community that can help the organization raise more funds and be more effective in saving and helping out disaster victims.

"First, I think the Red Cross should allocate a greater part of their resources in saving lives by getting people in calamity or disaster prone areas out of harm's way versus rescuing them when the disaster has already struck - with its victims caught unprepared, unaware. This is where technology comes in: Early Warning Alerts.

Today, there are about 10 million Internet users and about 50 million mobile phone subscribers in the Philippines. The Internet and the mobile phone present the most effective and immediate means of communicating to the general population, the dangers coming their way. Think Myanmar: 90,000 lives lost with 56,000 missing. Think Tsunami: 225,000 killed. Tens of thousands of lives could have been saved if only the authorities had a way of alerting the population in the affected areas early.

Comparing these numbers to the victims of Hurricane Katrina, considered catastrophic by U.S. standards, the number of lives lost, about 1,836, is much less compared to the Asian calamities I mentioned. Their Amber Alert System and rapid means of disseminating information had a lot to do with their effectiveness in handling the situation.

If the U.S. has their Amber Alert System, we too can have one, perhaps in the form of a mobile "Amber Alert" system.

Another area that needs special attention at the Red Cross is fund raising. Most Red Cross organizations outside the Philippines source funds from big corporations. At the Philippine Red Cross, we rely mostly on sponsored events and actual sales generating businesses to generate funds.

Technology can be best put to use by allowing what I call the "democratization" of gift giving. Why not allow people to donate via the net using Paypal? Why not via mobile phones using the operators' existing payment currencies such as "load", Smart Money, and Globe G-Cash? In the same way that Obama is winning the fund raising race via donations in small denominations (versus McCain's big-money-by-big-people way), we too can tap the masses via low denomination donations made possible electronically. Now a concerned Filipino can donate as little as P20 to the Red Cross, which otherwise would not have been cost-effective if he had to ride a jeep to a Red Cross office just to hand the P20 bill in."
Email Post
Labels: chikka dennis mendiola red cross
P.S. As an Amazon Associate I earn from qualifying purchases.